Former Congress chief Rahul Gandhi has given an adjournment notice in the Lok Sabha for discussing the SIT report in a case of violence in Lakhimpur Kheri district of Uttar Pradesh, in which eight people were killed.

In his notice, Mr Gandhi has sought for adjourning the business of the House and demanded that the Special Investigation Team’s (SIT) report on the Lakhimpur Kheri incident be taken up for discussion.

On Tuesday, top Opposition party leaders had met Congress interim president Sonia Gandhi to chalk out the strategy for the ongoing winter session of Parliament.

The Opposition also held a march from Parliament to Vijay Chowk demanding revocation of the suspension of 12 Rajya Sabha MPs.

Reacting to the privilege motion moved by several Rajya Sabha Members against him, former Chief Justice of India (CJI) and Rajya Sabha member Ranjan Gogoi on Wednesday said that the law will take its own course.
Mr Gogoi further informed that he will not be able to attend Parliament’s proceedings today, but was present there on Monday and Tuesday.
This comes as Shiv Sena and IUML MPs, earlier in the day, submitted privilege motions against Mr Gogoi on his remarks on attending the House to a media outlet.
“Law will take its own course,” the former CJI told ANI.
Rajya Sabha proceedings were adjourned for about 55 minutes till 12 noon amid protests by Opposition parties.
Soon after the listed papers were tabled in the House, some Opposition party members tried to raise their points.
With several Opposition members speaking simultaneously and some of them standing, Chairman M Venkaiah Naidu adjourned the proceedings till noon.
The proceedings of the House have been repeatedly obstructed following the suspension of 12 Opposition MPs from the Rajya Sabha on November 29 for the entire Winter Session of Parliament for their “unruly” conduct in the previous session in August.
Congress MP Rahul Gandhi moves adjournment motion in Lok Sabha over Lakhimpur Kheri incident demanding removal of MoS Home Ajay Kumar Mishra 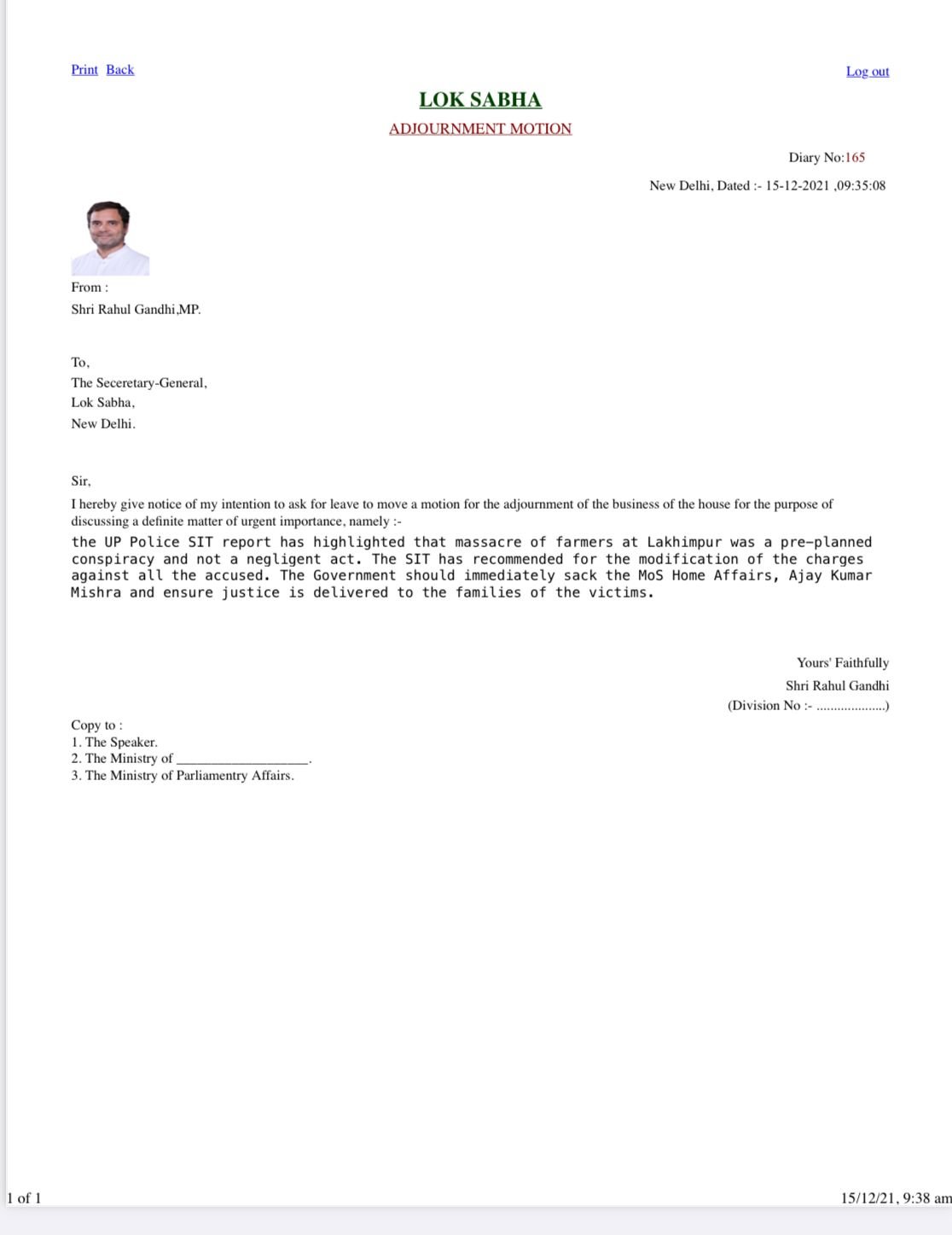 Rahul Gandhi has given an adjournment motion notice in Lok Sabha over the Lakhimpur Kheri incident. We will demand that the Government sack the minister (Ajay Mishra Teni): Adhir Ranjan Chowdhury, Leader of Congress in Lok Sabha

The Union Cabinet is likely to discuss “The Cryptocurrency and Regulation of Official Digital Currency Bill, 2021” at today’s meeting. The meeting is scheduled to take place at 1 pm, sources said.
The Union Finance Ministry on Tuesday had informed the Lok Sabha that a Bill on cryptocurrency is under final consideration of the Cabinet.
The Union government had earlier decided to table the Bill in the Winter Session of Parliament and, sources stated, it may later be referred to the Standing Committee for further deliberations.
The Bill seeks “to create a facilitative framework for the creation of the official digital currency to be issued by the Reserve Bank of India”.
The Bill also seeks to prohibit all private cryptocurrencies in India but it allows for certain exceptions to promote the underlying technology of cryptocurrency and its uses.
Parliament winter session: Congress Lok Sabha MPs to meet today
Congress has called a meeting of its Lok Sabha MPs on Wednesday. The meeting has been scheduled at 10:30 am at the Congress Parliamentary Party (CPP) office in Parliament.

Congress leader Manish Tewari on Wednesday moved an adjournment motion notice in the Lok Sabha over privatization in the banking sector and to discuss “government’s attempts on weakening the Public Sector Banks (PSBs)”.
Mr Tewari, in his letter to the Secretary-General of Lok Sabha, said: “I hereby give notice of my intention to ask for leave to move a motion for the adjournment of the business of the house for the purpose of discussing a definite matter of urgent importance, namely: at least 8 banking unions have called for a strike on December 16 and 17 against the government’s attempts of privatization in the banking sector. The latest attempt is being made via the Banking Laws (Amendment) Bill, 2021.”
- Advertisement -

Atrangii has an OTT approach, says Nivedita Basu, who was awarded the Best Content Creator TV and OTT 2022

No hand shakes for PM Narendra Modi this independence day

Atrangii has an OTT approach, says Nivedita Basu, who was awarded the Best Content Creator TV and OTT 2022

No hand shakes for PM Narendra Modi this independence day